"Pepper fog, this shit will fuck you up"
— Dainton

This was a prank from the third series of Dirty Sanchez which involves two of the Sanchez boys.

Dainton had acquired some pepper spray during their visit in the Czech Republic and wanted to use in on Pritchard. While Pritchard was asleep, Dainton had sprayed a bin with the pepper spray in hope that Pritchard would sniff it. Dainton woke up Pritchard a ordered him to sniff the bin. Pritchard was reluctant but eventually did and started choking. Dainton started spraying more which infected Pritchard, Dainton himself, the cameraman and Pancho (who wandered over to see what was happening). 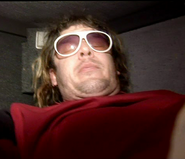 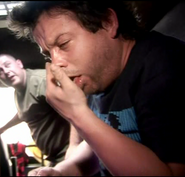 Add a photo to this gallery
Retrieved from "https://dirty-sanchez.fandom.com/wiki/Pepper_spray?oldid=2525"
Community content is available under CC-BY-SA unless otherwise noted.