"Tonight. Punch row Pancho is once again the object of the boy's amusement.Lee Dainton stays true to his trailer trash root. Pritchard can't seem to keep his clothes on. As For Daniel Joyce, he just needs help"
— Opening narration

This is the third episode of series one of Dirty Sanchez. This episode focus's on the personal lies and personalities of each Sanchez.

Pancho's parents reveal that Pancho always liked to entertain as a child and still does. Pancho himself describes himself as the "fool of the show" First time Pancho ever went aboard was with Pritchard to a German skating contest.

His friends describe him as "amazing". Pritchard finds Pancho humorous as you can mess with him all the time. Dainton find Pancho funny due to his clumsiness.

Dainton reveals that he use to get beaten up when he was a child. Pancho says that Dainton use to be a "surfer dude" but it all changed.

Dan's mother explains that Dan has always had the intensions to make people laugh from the age of a young infant to now. His father thinks that Dan had alot of potential a that Dan hasn't reach it yet.

Pancho thinks that Joyce wants to be a gimp as it seems that Joyce enjoys being the gimp character. Dan describes for the audience why he acts as the gimp, it's for humour of course. Pritchard thinks that Dan is out for the attention and is a "kinky git"

"Rock out, get your cock out"
— Pritchard's brother

Pritchard believes as we are all naked when we are born and that we are all naturally naked we should all be naked. His parents never hid the fact that they were nude in front of each other. His girlfriend states that you have to get use to Pritchard being naked. His mother says that it is the fact he isn't bright and perfers to "show them all" Pritchard reveals that he was bullied which resulted in him "having the more fun" in future life.

Pancho thinks Pritchard is a naturist.Joyce thinks it's all for humour. 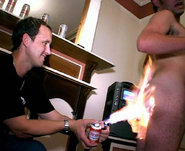 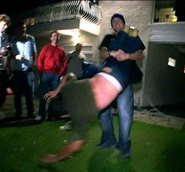 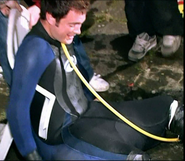 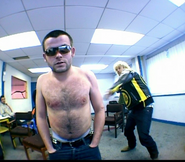 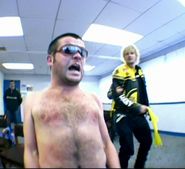 Retrieved from "https://dirty-sanchez.fandom.com/wiki/Personal_Lives?oldid=3299"
Community content is available under CC-BY-SA unless otherwise noted.