Pinhead is a stunt that involves a bed of pins layed down and Dainton having his head slammed down.

Dainton first did the stunt in Series one. It was a simple stunt that only needed Dainton's head on the bed of pins with Pritchard slamming his head down. However things took a turn for the worst when it came to getting the pins out, much to Dainton's shock one of the pins had actually managed to get stuck right in his skull, causing the usually calm Dainton to start panicking a little bit. Eventually though the pin was thankfully able to be removed and Dainton didn't suffer any other damage, he vowed he would never do this stunt again.

The stunt reappeared in the movie this time in order to fulfill the Greed sin during the Angry Pirate stunt. The original plan was for Dainton to rest his hand on a pile of pins with money stuck onto them and for one of the boys to slam his hand onto the pins themselves. However Dan suddenly got an idea and suggested to Dainton to use his head again like last time. Dainton, remembering what had happened the last time promptly told Dan to fuck off, a second later he is seen preparing to have his head slammed onto the pins yet again. After a 3, 2,1 Pritchard slammed Dainton's head onto the pins, making him scream in pain as Dan watched with a horrified expression on his face.

"That has to be the stupidest thing I've ever done."
— Dainton afterwards

The first pinhead resulted in Dainton regretting the stunt, and as mentioned he vowed never to do this stunt ever again, especially since one of the pins actually got stuck in his skull Dainton made the right choice until he was convinced to do it again a few years later in the movie.

The movie met a similar fate but this time none of the pins didn't get stuck in his skull, they did however leave him screaming in agony and pain. However unlike the first time he did get money out of it so things weren't that bad. 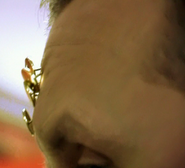 The pins stuck in Dainton's head

Dainton and his prize money

Dainton pulls the money off of his head 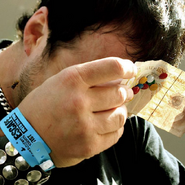 Retrieved from "https://dirty-sanchez.fandom.com/wiki/Pinhead?oldid=3631"
Community content is available under CC-BY-SA unless otherwise noted.