This was an incident from the first series of Dirty Sanchez involving three Sanchez members. It started as a Dainton vs Pritchard prank but soon turned into a short fight.

On the French ski slopes, Pancho got dressed in a polar bear suit, for reason unknown but was probably for a stunt/gag which never got filmed. Pritchard had gotten himself a tray in which it whacked Dainton over the head with it. Dainton almost fell unconscious from the hit.

While Pritchard and Pancho were shaking hands, Dainton decided to strike Pancho across the back of the head. Eventually Pancho got his head wear on where Dainton decided to kick Pancho in the nuts, this obviously made him angry and made Pancho chase and beat up Dainton.

Both Dainton and Pancho had sore nuts from hitting each other there. Dainton was almost knocked out from being hit by a tray, but no severe injuries. 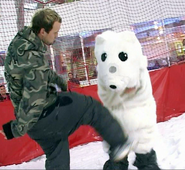 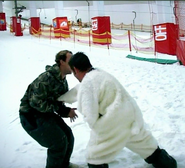 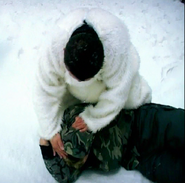 Add a photo to this gallery
Retrieved from "https://dirty-sanchez.fandom.com/wiki/Polar_bear?oldid=3001"
Community content is available under CC-BY-SA unless otherwise noted.