This was a prank that happened in the first series of Dirty Sanchez it involves Dan pranking Pancho as he passes by.

Pancho was on a motor scooter driving along peacefully when Dan decided to strike. In Dan's hand was some shite, he decided to splat Pancho as he passed by. In the process of splatting Pancho he also pushed him to the ground, smearing the crap.

Pancho, as usual, got angry and pounced up on Dan. Pancho began punching Dan but got more poo on him. Dan then chased Pancho in the nude with the poo still in hand.

Note: This was not featured on the DVD and is only available online or on TV, some the images are of poor quality and may be hard to see 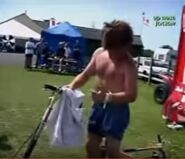 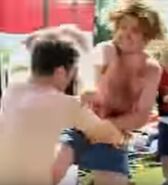 Add a photo to this gallery
Retrieved from "https://dirty-sanchez.fandom.com/wiki/Pooman?oldid=2407"
Community content is available under CC-BY-SA unless otherwise noted.