"I'm dressed like a prat in this scene, you're gonna need to regain your pride after this."
— Pritchard

This was a high risk stunt from the Dirty Sanchez film and fourth series. Here Pritchard regains his pride after being humiliated in the Phi Phi islands after his fight with Dainton and for looking like a fool in Japan after getting the crap kicked out of him in the wrestling ring.

The scene begins with a more serious dramatic tone to it, with the boys dressed in suits and talking about how Pritchard was going to regain his pride, complete with Japanese dubbed voices as well. Pancho in series 4 said that he was looking forward to seeing this opening scene, but then become mildly amused and annoyed to hear his voice being dubbed by a Japanese woman instead of a man. Upon arriving at the warehouse the boys met the 'Yakuza leader' to talk about which tool he would use to regain his pride, and to do that he was about to chop the tip of his finger off. Quotation marks are used because Pritchard reveals in the commentary that it was just an actor trying to look hard. Pritchard looks at the table with an array of sharp tools, all for the purpose of cutting off one's finger, eventually the illusion is broken when Pritchard speaks in his normal, English speaking Welsh accent and says he'll use the razor-bladed guillotine. Dainton and Pritchard had a conversation beforehand about how it's going to play out. Originally Pancho was to play the main role and was meant to cut the finger off, however after hearing it was Pancho that was going to do the deed Pritchard immediately said he wasn't going to let Pancho chop his finger off, most likely because Pancho is a short chubby fool at times. Pritchard told Dainton if he managed to go through with chopping the tip of his finger off, then he wanted Dainton to go out in the middle of a busy Japanese street and looking like an idiot while singing a song of his chosing, Dainton agreed to do this if Pritch actually went through with it.

The boys tested out the instruments to figure out how they would chop the tip off, first a saw that seemed too slow and cumbersome, then a samurai sword which Pancho swung about. However, the boys noticed how drunk Pancho was and due to the incredible danger of allowing him to have the sword it meant he was forced to step out, making Pritchard's earlier worries more credible. Lastly was the "guillotine" Dan had a hammer in hand and Pritchard placed his finger under the razer-bladed guillotine. After a three, two, one, Dan hammered the razer blade and sliced a chunk off of Pritchard's finger.

Pritchard experienced excruciating pain, and Dan would reveal in Series 4 that as soon as he hit the hammer down and everyone saw Pritch screaming and bleeding everywhere that he realised 'What have we done?'. . Pritchard's finger bled profusely and had covered his free hand so much that a small puddle had started to form in his palm.At some point he even claimed he could see the bone, though this was later confirmed to be untrue, it's more than likely Pritchard was in so much pain and the shock of having it done made him see things. Despite this, Pritchard was happy he regained his pride. Dan on the other hand decided to try and eat the bit of finger still in the guillotine, much to Dainton's disgust and outcries and attempts at stopping him, however Dan spat it out as soon as he put it in his mouth.

As Pritchard had gone through with chopping the tip of his finger off Dainton was forced to go out in the middle of a busy Japanese street, dressed in a pink leotard that clearly showed the outline of his cock and bollocks, a floppy sunhat and dark sunglasses while singing to a karaoke track of 'Do you really want to hurt me?', with everyone staring at him and the boys laughing at him, it's clear just from hearing him sing that Dainton felt incredibly embarrassed and had lost some of his pride. He would later dub himself as the superhero Pinky Dinky Dainty while dressed up in that outfit and vowed to get Pritch back when they go to Mexico.

However in Series 4 the boys, Dan and Pancho in particular expressed that they found it particularly odd that Pritchard could have done anything to Dainton and instead he made him do something that was quite tame in comparison to anything else they would normally do to each other, and thought that doing something so tame in exchange for Pritchard chopping a bit of his finger off as quite perplexing.

For the rest of the filming after this stunt Pritchard was required to wear a special bandage around his finger that would help make the skin grow back. 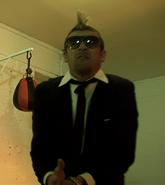 Retrieved from "https://dirty-sanchez.fandom.com/wiki/Pritchard_regains_his_pride?oldid=3814"
Community content is available under CC-BY-SA unless otherwise noted.