This was a challenge from the first series of Dirty Sanchez involving all the Sanchez boys.

The boys had a challenge of getting a huge bag of pubic hair, this includes at least one woman's pubs, the loser would have to eat all the pubic hair from the winners. Dainton had an easy time getting pubic hair from his family, friends and from his girlfriend. Pritchard also had quite a good time getting pubs though it took longer. Pancho struggled to get pubic hair but near towards the end of the challenge he managed to get the most. That left Dan Joyce, who forgot to turn up...

"I haven't fucking lost!"
— Dan on the phone with Pritchard, showing how to be a sore loser.

Dan Joyce lost the challenge and he did not take it well. He claimed he was cheated in this challenge though the boys reckoned they've discovered a very bad loser with Dan. Dan was forced to eat the pubic hairs on some pizza he had brought. Pritchard decided to add the pubs inside and outside the pizza and placed cheese to make it look more like a pizza. Upon taking the first bite he puked on the pizza, and each time he tried to take a bite from the slice he had he puked some more. Then he started to eat the puke/pube pizza, shoving his face into it while laughing like a maniac. Dan didn't finish his pizza, obviously. 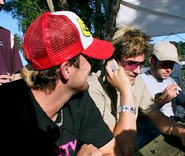 They deliver Dan the bad news...

Retrieved from "https://dirty-sanchez.fandom.com/wiki/Pube_pizza?oldid=3701"
Community content is available under CC-BY-SA unless otherwise noted.