"Y'know last time we did the um...staple stuff to the mantel piece and all that kind of shit. Just put your finger in there and "eh" Eh" EH""
— Dainton explains the stunt

This is a stunt from the second series of Dirty Sanchez. It features a rare time when Dainton is not the one being pierced and it involves another Sanchez.

Dainton had gotten hold of two quick grip clamps and wanted to "test" them out. He then thought of a good idea to pierce Pancho's fingers/toes with the clamps and some pins. At first the pin was resting on the clamps lower half with nothing sticking it down. Pancho had his finger on the top half while Dainton tightens the clamp. The first attempt failed on the last second due to the pin moving out the way of Pancho's finger. The second attempt had a similar circumstance.

A third attempt was to take place as Dainton this time secured the pin in place with gaffer tape. Dainton guaranteed that Pancho would feel a lot of pain. Like before Dainton tightened and tightened the grip. He then swiftly clamped Pancho's finger causing Pancho react rapidly taking the clamp away from Dainton and freeing his finger. Pancho freed his finger but still had the pin stuck through his nail. With his teeth, Pancho pulled the pin out as well as a chunk of his nail.

The next part involved two pins attached on both the top and the bottom of the clamp, to add to this it was going to clamp Pancho's toe instead of his finger. Even more pain was inflicted, this time Pancho almost kicked Dainton in the face for it. Pancho begged for it to be taken off and so it was taken off. Like before the pin was stuck in the nail.

A lot of pain was inflicted to Pancho. He also suffered bleeding and damaged nails from the pins piercing through. Pancho's foot turned blue from the pain and it was a stunt Pancho regretted. The clamps would make a return later on in the Arm wrestling stunt.

Putting the tape down 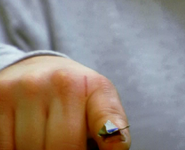 Add a photo to this gallery
Retrieved from "https://dirty-sanchez.fandom.com/wiki/Quick_grip?oldid=2463"
Community content is available under CC-BY-SA unless otherwise noted.