"The rich. They're a bunch of funny fuckers"
— Dan Joyce

This was a stunt that appeared in the movie and represented the sin, Sloth. It was set in Wales.

"This is Rabbits, this is what the toss like to do when the peasants goes on their land"
— Dan Joyce naming the stunt

Before the stunt each Sanchez member had a go firing a gun to see how the rich shoot for fun. The next stage involved the boys dressing up as rabbits and running from plates that were being fired at them by the rich.

The first to go was Pancho, who skipped merrily along. The rich aimed accurately at Pancho's testicles. They hit them and Pancho was no longer skipping along.

Pritchard decided for odd reasons to walk through his green mile, obviously he got hit by plates.

Dan tried to jump over the plates but got hit on the leg by a plate causing him bail out.

Dainton used a different tactic, he tried blocking the plates with his arse and back. Later on Pritchard and Dan copied the tactic and all three got hit.

Pancho had another try but got hit his ankle almost straight away and had to hop away from the scene, the rich kept firing despite Pancho bailing out.

They all suffered cuts and brushes from the plates smashing against them. A couple of times both Dan and Pancho had forfeited the stunt due to damage sustained. 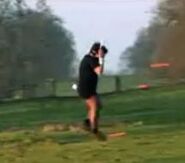 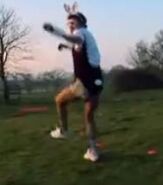 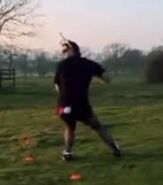 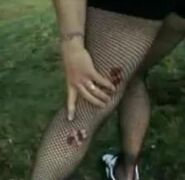 Add a photo to this gallery
Retrieved from "https://dirty-sanchez.fandom.com/wiki/Rabbits?oldid=2588"
Community content is available under CC-BY-SA unless otherwise noted.