This was presumably going to be a stunt that involved a man bathing with Ragworms however things went wrong. It is from the first series of Dirty Sanchez.

The Sanchez boys stumbled upon a man in a bathtub full of Ragworms. It was filmed to be seen as a gag/stunt however Dan ended up being sick all over the Ragworm man's head. The Rag worm man didn't like being puked on and got out of the tub. The Ragworm man grabbed and picked up Dan and decided to try and dump him into the tub of Ragworm for revenge, the other boys egging him on to do it. Dan struggled to get out of the grips of the Ragworm man but as soon as his face was put into the tub of ragworms Dan turned violent and punched the man in the head, Dan having become upset with the fact that his jacket had gotten dirty in the scrap.

The boys were shocked with Dan's behavior and apologized to the Ragworm man for Dan's actions. The Ragworm man himself seemed upset with what Dan had done and almost refused to talk to the producers about it. Dan didn't believe he was in the wrong what so ever, though Pritchard told him what he did was "well out of order", and even Pancho told Dan to "grow up". 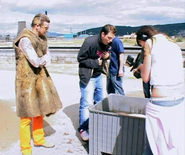 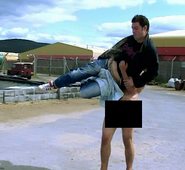 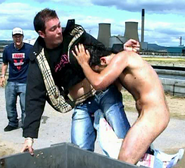 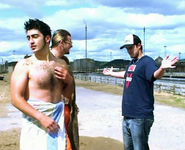 The boys mock Dan
Add a photo to this gallery
Retrieved from "https://dirty-sanchez.fandom.com/wiki/Ragworm_man_(gag)?oldid=3700"
Community content is available under CC-BY-SA unless otherwise noted.