"You've heard of Robo-Cop. Well this is Robocock"
— Dan Joyce before the prank

As expected, Pancho reacted in anger. He decided after to go for a week without drinking but it didn't last.

Really shouldn't have his mouth open.... 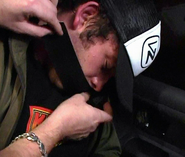 Add a photo to this gallery
Retrieved from "https://dirty-sanchez.fandom.com/wiki/Robocock?oldid=2415"
Community content is available under CC-BY-SA unless otherwise noted.