"Right shitchops, paper, scissors, stone! Who ever loses gets to chuck hot wax on the winner. "
— Dainton explaining the stunt

This was a stunt from the third series of Dirty Sanchez and serves as a continuation of the Dainton vs Pritchard rivalry.

First Dainton explained the stunt to Pritchard whom enjoys challenges. Who ever loses gets to chuck hot wax on the winner.

Third round Unknown what happened

After the stunt Pritchard dunked his head into the bucket of hot wax.

The boys had wax stuck all over their bodies. Burn marks were left behind on their skin as well as the wax causing their head to become sticky. Pritchard had to be given a brush which tore out a bit of his hair. 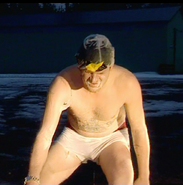 Add a photo to this gallery
Retrieved from "https://dirty-sanchez.fandom.com/wiki/Rock,_Paper,_Scissors,_WAX?oldid=2508"
Community content is available under CC-BY-SA unless otherwise noted.