"because you conditioned my back with a fucking Skipping rope, my turn, pay back"
— Pritchard

This was a minor stunt in the third series of Dirty Sanchez. This was part of the Pritchard vs Dainton rivalry.

As revenge for hitting him with a skipping rope, Pritchard had the chance to use a rubber dagger on Dainton. Dainton pulled his T-shirt up and around his arms ready for Pritchard to make a mark. On a count of three, Pritchard gave Dainton a hard hitting with the knife. Dainton retreated to a punching bag where Pritchard hit him again.

"He's opened up the flood gates of hell"
— Dainton

Dainton was left with a knife shaped mark on his back. Dainton also vowed to get Pritchard for attacking him twice. 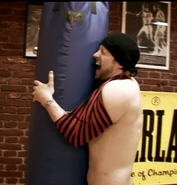 The second hit
Add a photo to this gallery
Retrieved from "https://dirty-sanchez.fandom.com/wiki/Rubber_Dagger?oldid=2512"
Community content is available under CC-BY-SA unless otherwise noted.