The Sanchez war was a running gag and event that occurred throughout series three of Dirty Sanchez. Unlike the Pritchard vs Dainton rivalry, this conflict involved every single member of the Sanchez crew as well as involving the producers and even other ordinary people.

Build up to all out chaos Edit

Before the entire thing blew out of proportion, the boys simply performed stunts and pranked on another without any huge problems sprouting. However Dainton had planned from the start of tour to get Pritchard in order to keep himself entertained. Pancho and Dan simply wanted to enjoy the tour without any problem but knew that Dainton would cause a stir and that Pritchard would face most of the attacks, Pancho feared he would be a victim of both boys. Dan had made a deal with Pancho so that he would not attack or prank him throughout the tour especially as Pancho was extremely nervous about his wife's well being seeing as he would be away for a long time.

When the tour first began and the boys needed to get into Sweden to do their first live show. Dainton had stolen Pritchard's passport and hidden it with a spider . From that moment on Pritchard knew the journey would be hard for him.

Dainton and Pritchard had challenged themselves to see who was better out of the two. However both boys didn't play nicely and both cheated in some of their challenges which later resulted in a fight occurring. Pritchard also kept getting drunk which meant the film crew were not safe ether as evident when he trashed a hotel room while attacking a producer. This caused Johnny B to get involved and sort Pritchard out.

At first Pancho was the main victim of the attacks mainly because he was so fable and humourous to annoy. Pancho was the first to be attacked in Scandinavia by having an interview ruined by Dainton . Meanwhile on the bus because he had fallen asleep, the boys had shaved a patch out of his head. Things got worse for Pancho as he was forced to Sky dive and at another point he was forced to climb a boat sail to get his mobile phone back.

Dainton and Dan Joyce joined forces at one point to prank Pritchard and Pancho with a Gay wedding where Dan managed to make himself a vicar meaning that the two boys were going to be offically married. This oviously annoyed the two boys and would be the only time Dan sided with ether Dainton or Pritchard and would be the only time Dan pranks Pancho as well.

In Greece, things got worse. Firstly the Sanchez boys rebelled against Johnny B leaving him and the bus drivers behind in Czech Republic. Dainton, non stop, was pranking Pritchard and attacking him for little to no reason. Dainton pranked Pritchard by leaving in waters full of Jellyfish and sea urcins. While Pritchard was asleep, Daiton did multiple things to him such as putting a Jellyfish on Pritchard's top, writing "Bum fights" on his forehead and hitting him with a fish slicer. Meanwhile Pritchard and the camera crew pranked Pancho by putting dog food all over him and whipped cream on his face which later saw Pancho punch Pritchard in the head.

Throughout the journey some of the film crew, producers and Johnny B had some minor fights. A health and safety expert and cameraman had a fight because the health and saftey expert pushed the cameraman. The argued and had a little cruff. Johnny B and a camera man punched on another in the face resulting in the cameraman having a broken nose. According to Dainton, off screen fights occurred between the crew and staff.

The boiling point occurred in Italy. Firstly Pritchard's passport was vandalized by Dainton which almost meant that Pritchard could not enter Italy. Dainton was whipped by Pritchard for revenge but Dainton got him back .

The worst happened during the Pepper spray incident. On the coaches, Pritchard had a plan to get Dainton. While the boys were performing stunts, Pritchard pulled out some pepper spray and attacked Dainton. In the fight, Pritchard revealed that he did it becuase Dainton would not leave him alone. Dainton fought back though and got Pritchard with the pepper spray too. Pancho and almost every cameraman, Jim Hickey, a few producers and the bus driver was also caught up which resulted in the entire crew being forced out of the bus and made to continue the tour on foot.

Pancho didn't get off lightly ether. Pritchard and Dainton attacked Pancho as he slept, Dan tried defending Pancho but the two boys didn't care. Half of Pancho's hair was shaven off and upon waking up Pancho was furious. He chased Dainton and Pritchard, who ran off in two different directions. However Dainton was caught by the small man and the two had a fight. Dainton threw Pancho on to the ground and even punched Pancho a few times to get him off,then Pancho bit Dainton.

Dainton was a little unhappy with Pritchard for the Pepper spray incident and that Pritchard had deserted Dainton when Pancho had beaten him up. Pancho, on the other hand, never found Pritchard after the shaving of his head which ultimately lead to Dainton coming up with a cruel plan. Dainton came up with a revenge plan that would humiliate Pritchard. After Pritchard had been intoxicated, Dainton walked into his room and started shaving Pritchard's hair , something he was passionate about. Dainton tried waking him up when he was drunk but Pritchard never reacted. This gave Dainton more time to plan more chaos, and before leaving the room he quickly wrote on the mirror (with a minor spelling mistake) 'Pancho's revenge' in an attempt to make Pritchard believe Pancho had shaved his precious hair. The morning after, Pancho joined in and tried to shave some more hair off but it didn't work, Pritchard awoke and chased Pancho away and quickly discovered what had happened to him. Pritchard was extremely angry, possibly the only time where he had seriously been proper angry with Dainton, knowing he had something to do with his baldness, even after discovering 'Pancho's revenge' he still knew it was Dainton and went to confront him, revealing to Pancho the message and actually threatened Dainton, Dainton in turn getting just as angry at him. Pancho was soon able to help calm Pritchard down and make him feel better, however the damage had been done, and Pritchard had to shave all his hair off along with Pancho.

After the huge prank, the entire crew saw how far things had gone and though that it all went out of order. Dan shaved his head in support for Pritchard. Pritchard didn't appear in the live show because of the prank. Dainton also felt a bit guilty but didn't think he was in the wrong still.

End of the war Edit

By Spain the war started to die out and peace among the boys was starting to return. Pritchard tried to get Dainton at least once but failed. Dainton had clearly defeated him physically and mentally. Dainton and Pritchard started to become friends again and to show it they had a huge party on a boat. A mousetrap on the end of Pancho's nose signed the end of the war. 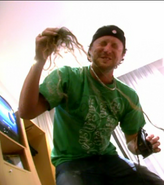 Add a photo to this gallery
Retrieved from "https://dirty-sanchez.fandom.com/wiki/Sanchez_War?oldid=3540"
Community content is available under CC-BY-SA unless otherwise noted.