This was a minor prank performed by Dainton involving a small amount of his blood from an injury he had and him annoying Pritchard.

During the night Dainton had accidentally impaled his foot on a shard of glass on the floor. For some reason this gave Dainton an idea to annoy Pritchard, who had a lot to drink and became drunk that night, by staining his kitchen floor with a bit of his blood and drawing a pentagram, wanting to see Pritchard's reaction.

Pritchard was so drunk that he didn't notice the pentagram until much later, when he did see it he humorously reacted in the most formal of ways. He didn't like the fact that Dainton had drawn the pentagram because, as Pritchard says himself, he was not a satanist or a devil worshiper and didn't feel like calling the devil on that particular night. Pritchard also stumbled and fell backwards onto the floor while discussing his confusion and annoyance to Dainton. Dainton did wash the stains away afterwards as a friendly gesture. 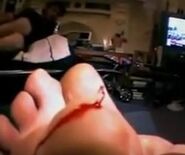 Dainton's cut and the shard of glass 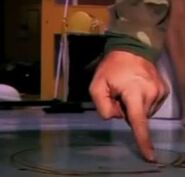 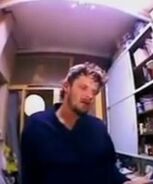 Pritchard's disgust.
Add a photo to this gallery

Retrieved from "https://dirty-sanchez.fandom.com/wiki/Satan_worshipper?oldid=3702"
Community content is available under CC-BY-SA unless otherwise noted.