"Holy shit man we're like on this massive tour with this tour bus, totally blinged out"
— Dainton

This is the first episode of the third series of Dirty Sanchez. This episode the boys start their adventure through Europe embarking on what they find fun and meeting some Vikings along the way.

Johnny B the tour manager is introduced to the Sanchez boys and already makes an impact with his hard headed personality. Johnny lays down some ground rules such as:Don't shit on the bus, Don't cause trouble, Don't get too drunk The Sanchez boys vow to never cause these things. Before the boys can get to Sweden they need to give in their passports. However Dainton had hidden Pritchard's passport with a Tarantula. After growing a pair, Pritchard gets the passport and the madness begins.

"Health and safety is extremely important"
— Pancho before being attacked

For the first time in his life Pritchard breaks a bone in this case his shoulder after being brutally attacked by some ice hockey players.

The boys end up meeting some locals such as Death Metal fans who would be watching their live show later on as well as some Vikings.

Dainton believes that the stunts have to be more visual meanwhile Pancho has to become more brave upon getting hit by something. Dan thinks the team will struggle as they won't be able to speak their language so visual stuff will easily work. Dan believes that Pancho will ruin everything because of some reason or the other.

Pritchard was in a sling and could only use one arm in the stunts he had to perform. Dainton was looking forward to the live show.

The feedback from the audience was primarily positive as many thought they were worse than Jackass as well as being described as "not right in the head" They all loved it. The Sanchez boys loved it as well so much that later on Dainton described this live show as one of the best. 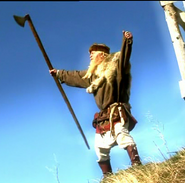 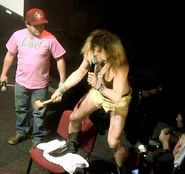 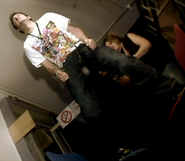 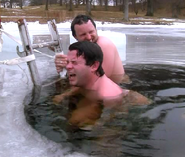 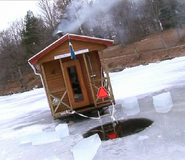 Add a photo to this gallery
Retrieved from "https://dirty-sanchez.fandom.com/wiki/Scandinavia?oldid=3280"
Community content is available under CC-BY-SA unless otherwise noted.