This was a stunt from the first series of Dirty Sanchez and involves only one Sanchez member.

Pritchard went mad one evening and started beating himself up. He had a head guard and boxing gloves and started punching himself in the head multiple times. After that he bashed his fists into his stomach but as this didn't really work he ended up hitting himself in the head which in turn knocked himself backwards onto the floor. As Pritchard wanted hurt some more he decided to run and jump into a wall, he did so multiple times before hitting himself one last time in the face and then giving up.

Though an aftermath isn't shown it is clear by Pritchard's facial expressions that it was exhausting and painful. 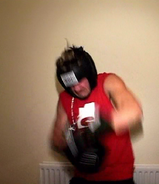 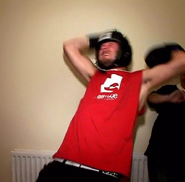 Add a photo to this gallery
Retrieved from "https://dirty-sanchez.fandom.com/wiki/Self_beating?oldid=3193"
Community content is available under CC-BY-SA unless otherwise noted.