"Yesterday I was really like petrified of doing this, we're not gonna make it down the hill again y'know...I really enjoyed it afterwards"
— Dan Joyce

This was a stunt that was featured in the first series of Dirty Sanchez and was originally going to feature just three Sanchez boys but ended up featuring them all.

The boys first challenge was to scale the ski slope from the bottom to the top. As they got higher and higher the boys were getting more grumpy and were starting to regret the stunt before actually performing it. Pritchard didn't want to participate due to the coldness of the stunt and that he was too tired to perform.

Dainton, Dan and Pancho all stood by the edge of the cliff and got blasted by the snow cannon, it was a challenge to see who lasted the longest. They all stood still and started screaming. It seemed that they didn't like it. After a while Dan left meaning only two were left to fight for the longest time under the snow cannon. Dainton had enough and Pancho celebrated the win of the challenge only to leave soon after. Despite screaming a looking as if they're uncomfortable during the stunt all of the boys loved it and then encouraged Pritchard to take part.

Pritchard stood on his own with a coat on. He stood there for a few seconds before leaving. He agreed it was fun.

The boys were all shocked that Pancho won the challenge. They all had frost all over their faces and hair. All the boys loved the stunt. 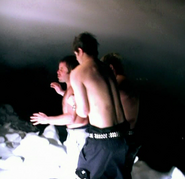 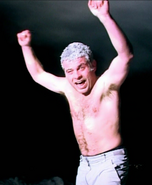 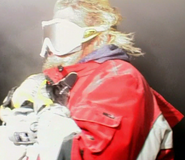 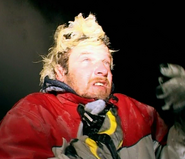 Add a photo to this gallery
Retrieved from "https://dirty-sanchez.fandom.com/wiki/Snow_cannon?oldid=2444"
Community content is available under CC-BY-SA unless otherwise noted.