This is the last episode in the third series. Now the boys are in Spain their last stop where they have to travel on foot with limited supplies available, it is a case of how will they cope?

"Okay we've arrived in Spain. Err, we're at the airport, I spend all my money, got them a car and see what happens from here."
— Johnny B describes the situation

The boys no longer have a buss to travel in so Johnny B had to get a car in order for them to travel. To make matters worse, they have a low money supply available so they have to camp out instead of being in a hotel. Despite this Dainton is looking forward to being in Spain.

Out in the cruel wilderness Edit

With a low budget, the boys spend most their time in the wilderness. The boys however discuss the cruelty that has occurred throughout the series. Pritchard believes that without the cruelty then the show wouldn't work and the homour would not exist. Pancho names Dainton as the cruelest of them all because he always dishes all the torment but never gets done over himself. Dainton doesn't believe he is as cruel as the boys put out, instead he states that he is a "lovely" man. Pritchard obviously disagrees.

"As the tour's gone gon, I think time has finally take a toll on us"
— Pancho

As seen throughout the series, the boys have done nothing but cause anarchy. The boys though are starting to become more peaceful among each other despite the cruelty that has and still occurs. Dainton has almost given up with annoying Pritchard however he does get him time after time. Over night the boys are forced to camp at a beach where Dainton decides to get Pritchard one last time. Pritchard also reveals that despite all the hell he was put through he loves going on tour and enjoys his friend's comfort.

"I never learnt fuck all in school. But in this tour I've learnt more than I ever had at school. I've learnt about respect, crueltiy, gayism. I've learnt so much."
— Pritchard

The boys have their last live show at a pub (as usual) This live show was a huge success even if Pritchard puked blood. After the live show the boys celebrated the end of the tour with a massive party on a boat full of naked women and drunk people, the boys had a happy end to their adventure throughout Europe. 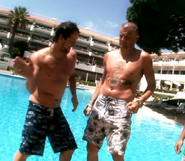 Retrieved from "https://dirty-sanchez.fandom.com/wiki/Spain?oldid=3472"
Community content is available under CC-BY-SA unless otherwise noted.