"That is literally going to go right into my ass"
— Pritchard

This is a stunt from the second series of Dirty Sanchez and only involved two Sanchez boys hitting each other with the studs of a football shoe.

Pritchard was relatively nervous about being hit with some studs. Dan volunteered to hit the poor Pritchard on the ass. Dan smacked Pritchard with a hard whack. Pritchard squeaked in pain and jolted forward from the huge hit. 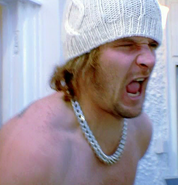 Add a photo to this gallery
Retrieved from "https://dirty-sanchez.fandom.com/wiki/Spiked_stud?oldid=2483"
Community content is available under CC-BY-SA unless otherwise noted.