This was a challenge from the second series of Dirty Sanchez involving all of the Sanchez boys.

All the boys had to go on a treadmill wearing a sweat suit connected to a cup. Dan went first with Pancho following after him then Dainton and finally Pritchard. The idea was to run on the treadmill for at least five minutes each, however, the boys were so unfit that they were unable to do so.

After they filled the jar with their sweat the boys had to see who would have to drink the sweat. They all had a hot stone on their hands, first to drop it would have to drink it. The pain was enormous with the boys close to dropping it multiple times, luckily Dan dropped his first.

Dan vomited before he even drank it. But things got worse as soon as he drank it, he started to vomit almost uncontrollably from drinking it. Dan considered the stunt his least favourite. 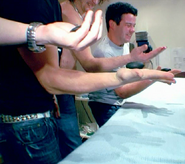 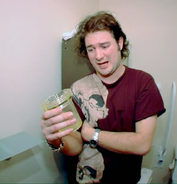 Add a photo to this gallery
Retrieved from "https://dirty-sanchez.fandom.com/wiki/Sweat_cocktail?oldid=3058"
Community content is available under CC-BY-SA unless otherwise noted.