"If you're gonna do something for the movie, it's gotta be big!"
— Pritchard

Before the boys went out to promote their new movie at a football game, they discussed what they'll do to get Cardiff City fans on their side, all while Pancho grumbled about not being a fan, instead being a Swansea supporter. The boys allowed Pancho to wear a Swansea shirt in a stadium full of Cardiff City supporters as they wanted Pancho to get beaten up. As soon as they entered the field, Pancho was immediately isolated by the announcer and the other boys (though ironically Dan was also wearing an opposing team's shirt though no one called to this)

"You Jack bastard!"
— The crowd

After they performed the Goal stunt, in which Pancho was the sole target of all the attacks. The boys were then told to go into certain positions but Pancho had taken a different way. It's unknown what happened (though theorized to be because of being attacked by the footballer and isolated) but both Pritchard and Pancho got into a fistfight in the middle of the pitch in which Pancho's shirt was ripped off and security swarmed the pitch and, with help from Pritchard tackled the violent Pancho to the ground. Pancho is then dragged away to the side lines where he is kicked in the back and thrown to the ground while Pritchard stomped on Pancho's Swansea shirt.

"He's short, he fat and a stupid twat! Oh Pancho!"
— Dainton in a sing song tone

Pancho suffered the brunt of the attacks and wailed in pain as he was dragged along the ground, he was between angry and laughing his head off as the event drew to a close. He did hug the one footballer who had kicked the ball into him, though was quite upset by being kicked by the security as they lifted him away. Pritchard was in no visible pain and according to Dainton "taking all the glory"

"I've never seen such bulling in all my life but he deserved everything he got that Jack Bastard!"
— Dainton

Dan and Dainton stayed away from the situation but both laughed at his misery, with Dainton feeling more sympathetic for Pancho's bullying, but only to state he "deserved" it. 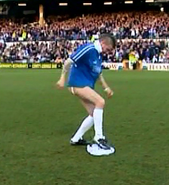 Add a photo to this gallery
Retrieved from "https://dirty-sanchez.fandom.com/wiki/The_Anti-Cardiff_midget?oldid=3718"
Community content is available under CC-BY-SA unless otherwise noted.