"You could of had my fucking eye out!"
— Pancho

This was a prank that went wrong involving Dainton and Pritchard. Dainton, urged by Pancho, throws a pieces of cactus onto Pritchard's head, soon enough Pancho was caught up in the action as Pritchard managed to throw it at him, shit soon hit the fan afterwards.

Originally it was meant to be a prank. Urged by Pancho to be as silent as possible Dainton, with a piece of cactus on a glove whacked it on a resting Pritchard's head. This type of cactus was shown earlier on in the show, no matter how much you pulled on it it wouldn't come off so easily, Dainton joked and laughed at Pritchard's misery which only fueled his anger and anger filled sarcasm. Dainton took the cactus off only to put it back on again. Pritchard got the cactus off and managed to throw it in Pancho's face, with the piece of cactus nearly getting into Pancho's eye. Pancho soon got angry and demanded for the car to stop, Pritchard explaining he wasn't trying to aim right at Pancho's face, with Pancho making a vow to Pritchard that he was dead for what must have been the millionth time with either Dainton or Pritchard

"You're a fucking liability."
— Pancho

Pritchard tried explaining again that he had no intention of throwing it at Pancho's face, only to quickly be chased by Pancho who tried throwing a stone at him, with Dainton and Dan watching the entertainment that was unfolding. Pancho and Pritchard started arguing while the other Sanchez boys and even the film crew laughed at them. Pritchard decided to get a slap by Pancho in order to settle down things. Pancho then gave Pritchard a slap, but things didn't settle. Pancho yelled at Pritchard some more.

"It's only a TV program, you could of had my eye out"
— Pancho

"I know I know- but I had on my head"
— Pritchard
" YOU COULD OF HAD MY FUCKING EYE OUT!"
— Pancho before bursting into laughter.

As he begins to shout that Pritchard could have had his eye out with the cactus Pancho, as well as Pritchard, Dan, Dainton and the crew begin to laugh, all was forgiven and the two gave each other a hug. The pain of the cactus getting stuck in them still hurt, but overall it was hilarious for everyone but Pancho and Pritchard at the time.

This is gonna go well... 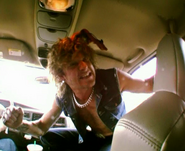 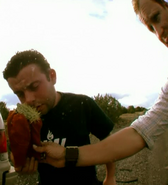 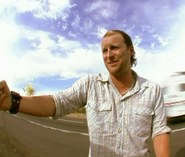 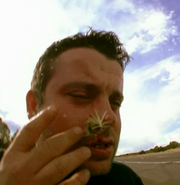 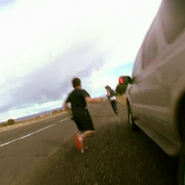 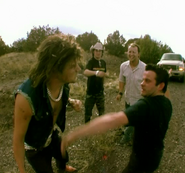 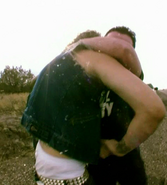 Add a photo to this gallery
Retrieved from "https://dirty-sanchez.fandom.com/wiki/The_Cactus_incident?oldid=3614"
Community content is available under CC-BY-SA unless otherwise noted.