"Some of the things I've done over the years and some of these things are just stupidly ah just absolutely stupid. How I've managed to get away without breaking something badly I really don't know."
— Pritchard's description of Timber

This was a stunt that appeared only in the second series of Dirty Sanchez and involves just two of the four Sanchez boys.

Outside the building site Pritchard had set up a ladder by a lake and climbed to the top. The other boys pushed the ladder forward which resulted in Pritchard falling off the ladder with the ladder crushing him afterwards.

At the building site, Pritchard redid the stunt but this time the landing was not pleasant water but a pile of dirt. Pancho decided to have a go, no only for the thrill but also to lose his fear of heights. The other boys strapped him down and eventually Pritchard pushed Pancho face first into the dirt.

Pritchard did the stunt on last time in London where he stood on a tree branch as it was being cut down, he fell into a lake.

No real injuries occurred for the high risk stunt except for the second attempt with Pritchard, he almost broke a leg from the ladder collapsing on him. 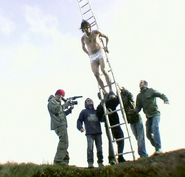 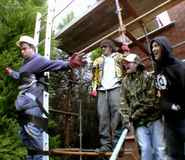 Add a photo to this gallery
Retrieved from "https://dirty-sanchez.fandom.com/wiki/Timber?oldid=3036"
Community content is available under CC-BY-SA unless otherwise noted.