"Pancho's like frail and all over the place and he's got clumsy little hands, dammit that's what what makes Pancho so funny"
— Lee Dainton

This was a stunt from series one involving Pancho on a skateboard hitting a wall of tires. It took two attempts to get the stunt right.

Pancho's first attempt went off good at first with Pancho skateboarding to his destination however as soon as he reached the last three metres he fell off of his skateboard.

He attempted a second time this time he managed to smash into the tires. Upon smashing into the tires he was chucked in the air and came smashing down to the ground.

Pancho on suffered minor injuries such as scraps and dirt stains but no serious harm. 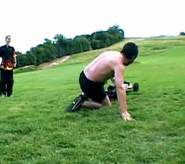 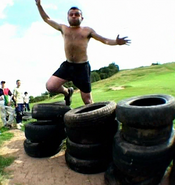 Add a photo to this gallery
Retrieved from "https://dirty-sanchez.fandom.com/wiki/Tired_out?oldid=2420"
Community content is available under CC-BY-SA unless otherwise noted.