"Don the trash. Time for a smash!"
— Pancho's rhyme

At first Dan Joyce had difficulty in putting a trash can over Pritchard's head due to claustrophobia. So the boys decided to stone Pancho before smashing cans. The boys were located at a beach where there were plenty of stones to throw at Pancho with. Pancho was protected by two trash cans which deflected most shots but Dainton decided to get closer and throw a large stone at Pancho. Pancho decided to quit the stoning but still got hit by a few stones.

This time Dan took part by wearing a trash can over himselp and challenging Pancho to a duel. Pancho and Dan ran at eachother and clashed with one another. This caused Pancho to fall over on his back while Dan didn't.

Pancho and Dan didn't suffer any pain in the trash bash. With the stoning Pancho had suffered a hit on his left arm which was so painful he quit doing the stunt, he had a bruise afterwards.

Pritchard having difficulty with the trash 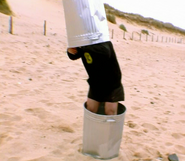 Dan in a trash can 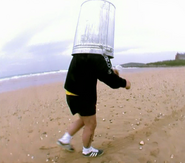 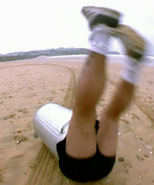 Add a photo to this gallery
Retrieved from "https://dirty-sanchez.fandom.com/wiki/Trash_bash?oldid=2482"
Community content is available under CC-BY-SA unless otherwise noted.