This is a stunt that appeared in the first series of Dirty Sanchez and features Dainton as well as Pancho and Pritchard who were thrown in during the madness.

Drawing pins were laid all over the floor and Dainton started the stunt off by sitting on the pins, which in turn pierced his hand, almost his veins. Dainton then laid on his back on the pins, Pritchard jumped on top of Dainton causing more pain. Dainton gets up and everyone around him begins to chant "voodoo Daint!" as Dainton dances flicking pins off. Dainton laid down once more on his stomach this time Pancho on a skateboard put pressure on him

The pins left Dainton full of holes and the worse on being in his hand, near his veins. He was bleeding slightly and was left with bruising. 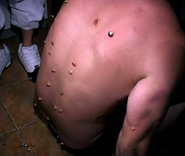 Add a photo to this gallery
Retrieved from "https://dirty-sanchez.fandom.com/wiki/Voodoo_Daint?oldid=3233"
Community content is available under CC-BY-SA unless otherwise noted.