This was a stunt from the second series of Dirty Sanchez involving three of the four Sanchez members.

Dan Joyce volunteered to be waxed first and Pritchard was willing to help his friend in need. First he had his "snail trail" waxed. After a few waxes on his "snail trail" Dan wanted out but not before having his testicles waxed. Though laughing at the Health and Safety boss "fondling" with his balls he soon felt the pain. Because of the intense pain Dan's penis had shrunken which caused all the boys to laugh at the size and sent Dan into hysterical laughter.

Pancho was next to waxed, this time on his chest. Upon waxing Pancho they discovered that Pancho had a lot of thick hair that came off. This fuel the boy's sadism and resulted in Pancho being waxed even more. The boys made a cross on Pancho's chest.

Dan and Pancho suffered pain from their waxing but it was only a stinging pain. Pancho's cross remains on him for the rest of the series. 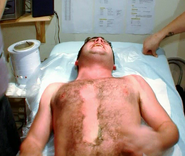 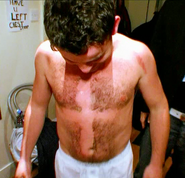 Add a photo to this gallery
Retrieved from "https://dirty-sanchez.fandom.com/wiki/Wax?oldid=3312"
Community content is available under CC-BY-SA unless otherwise noted.