"103 paintballs to break the World record...But there isn't even a world record!"
— Dainton explains the stunt briefly

This was a prank that happened in the movie. It was a prank by three of the Sanchez boys against Pritchard as a part of the Anger sin.

Breaking the record: For being a gullible ring nut Edit

Sometime at night in Russia, Dainton had gotten himself on a computer and started to create a fake world record. When he made the fake world record he decided to inform Dan and Pancho about the prank he wanted to pull on Pritchard.

The next day, Pritchard had been informed about breaking a record for the most paintballs on the naked body which excited him because it meant he would be more famous than he already was. Dan read out loud the "letter" that was sent by the World record team. It turns out Pritchard had to beat a man called "Anthony Kelly" who was the current record holder after being hit by 102 paintballs from about five metres away to the naked body.

Pritchard striped naked with only his pants, socks and a paintball mask. Each Sanchez boy took their turns firing tens shots each time. Each of the boys shot paintballs at Pritchard 10 times, making him yelp like a dog while he also kept count of how many paintballs had hit him. During the whole thing Pritchard uttered some pretty ironic statements, such as 'that Anthony Kelly is a right thick cunt!' and of course the infamous 'I'm in that big book baby! For being a right stupid twat!'. While catching his breath Dan noted that Pritchard looked like 'King Kong spunked' all over him due to the messy results of being hit with a ton of paintballs. At one point Pancho shot Pritchard but only shot him three times, it turned out Pancho had been drinking before the stunt and was then forced to stop being a part of the stunt leaving only Dan and Dainton to be left to shoot Pritchard. Dainton got the last shots on Pritchard which excited Pritchard, making him gloat '103 paintballs to the body, Kelly kiss my ass you did 102!' as he thought he won the record...

"Jim, he looks like he's been hit by a truck"
— Dainton argues with Jim Hickey over whether they should tell the truth or not

Pritchard was absolutely ecstatic that he had beaten the record, however he was left in a good amount of pain from getting hit by 103 paintballs. As he went to shower off the paint still on him he had no idea of what was going on behind the scenes, the rest of the Sanchez crew argued with one another over whether they should tell the truth about the World record break due to how excited he was, Jim thinking they had gone too far and Dainton telling him they have gone too far. Dan revealed Pritchard had told him he was about to phone his mum and tell him he broke a world record, making Pancho snort a laugh, and revealed in Series 4 Dan wanted to beg to Pritchard not to phone anyone as he knew the truth, especially since he was going to tell one of his friends who is actually in the Guinness book that now he would be as well, and in the commentary for the film Dainton reveals Pritchard did in fact phone his mum, and both her and Pritchard's granddad were excited for him, Pritchard's granddad, according to Dainton, telling Pritchard he knew he would get into 'the big book' someday. The paintballs didn't cause Pritchard to bleed but they did leave over one hundred and three bruises, one of the worst bruises was on his arm where it swelled up from the shots. The sight of the bruises shocked Dainton, the one on Pritchard's arm caused him to walk out of the room, Dainton would later say that if Pritchard found out the world record attempt was just something Dainton had made up on his laptop the night before (with the scene quickly showing Dainton the night before creating the fake record on his laptop and giving a shit eating smile to the camera) then he would be fucked, and because of the damage done to his friend Dainton didn't have the heart to reveal the truth to him.

That was of course until the boyos had arrived in Phi Phi and Dainton and Pancho had won the Crab racing contest. Dainton and Pancho would be staying in a very nice hotel while Dan and Pritchard would be staying in a shit hole on the other side of the island (though it was revealed in the same contest that Pritchard and Dan had been given dead crabs, and behind the scenes it was done to give Pancho some well needed rest after his liposuction). Pritchard, not wanting Dainton to remain cocky about his victory, and wanting Dainton to be pissed off on his way back to the hotel finally revealed his I Love Dainton tattoo to the gang, Dainton not believing the tattoo was real at first while Pancho and Dan laughed at what Pritchard had done. As revealed by Dainton in Series 4 before the tattoo reveal he still didn't have the heart to tell Pritchard the truth about the world record attempt, however the tattoo had angered Dainton so much that he finally revealed the truth to Pritchard. This reveal caused Pritchard to get especially angry with Dainton, and reasonably so as he himself pointed out that he had "103 fucking bullet holes in my body for nothing!" and the whole thing made Dan go into a fit of hysterical laughter, as he thought that, seeing Pritchard's attempt at getting at Dainton backfiring and causing him to get pissed off instead, coupled with the fact they had both done something to get at each other weeks, possibly months before, and not tell each other until this moment, as the funniest thing he'd ever seen in his life. however Pritchard didn't see the funny side to any of this and was so angry that he challenged Dainton to a fight.

However in the commentary for the film Pritchard's view on both the world record attempt and the reveal were more positive, as he mentioned that despite being really angry when he found out, and saying had he found out the truth AFTER what he went through he would most likely have gone bananas, and said in Series 4 he would have ended up in prison after killing Daint, and in the commentary mentioned he still can't look at the footage properly without being reminded of how stupid of a twat he was to believe any of it, looking back at it he found the whole thing funny, and actually praised Dainton for getting him good and proper, though he mentions he still cringes whenever he remembers it, especially at how gullible he was for believing it was real . 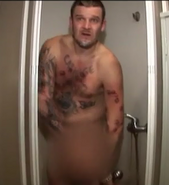 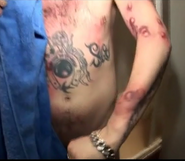 Retrieved from "https://dirty-sanchez.fandom.com/wiki/World_Record_break?oldid=3852"
Community content is available under CC-BY-SA unless otherwise noted.