"They really push you, like you can't stay still at any point you must keep moving"
— Dan Joyce

This was a work based stunt that featured in the second series of Dirty Sanchez. This was meant to boost team work.

"You got sixty seconds"
— The Corporeal

The Sanchez boys were set into two teams, Dan and Dainton vs Pancho and Pritchard. It was a race involving one Sanchez buoy carrying another on his back as if they were wounded.

The challenge started straight away, with no time to rest. Pancho took the lead at first carrying Pritchard and running straight forward to the finishing line. Dainton and Dan were falling behind and had left a huge gap in between the other team. After a while, Pancho started getting tired which lead to Dainton running past him. Pancho dropped Pritchard down and started puking, Dainton had gone passed them by this point and about to win. Dainton himself started getting tired and put Dan down only to go forth again, Pancho was still being sick. Dainton and Dan had won by the point Pancho got ready to carry Pritchard.

Like the rest of the episode, the boys suffered a lot of pain from the effort put through in the military exercise. 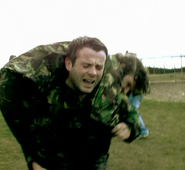 Add a photo to this gallery
Retrieved from "https://dirty-sanchez.fandom.com/wiki/Wounded_soldier?oldid=2480"
Community content is available under CC-BY-SA unless otherwise noted.